It is said that the Canongate connection with Edinburgh Castle goes back through the mists of time to the twelfth century, when the Abbey of the Holy Rood was first established by Canons of the Augustinian order already founded on the castle rock. To this day Edinburgh Castle remains part of the parish of Canongate and the Minister is Chaplain to the Governor, who has a pew in the Kirk.

As a result, Canongate Kirk is widely held to be the military church for Edinburgh – historic connections with The Royal Scots and The King’s Own Scottish Borderers have led to our current designation as Regimental Kirk of The Royal Regiment of Scotland. We fulfil the same role for The Royal Scots Dragoon Guards and The Scots Guards. Our War Memorial Chapel also contains the Roll of Honour of 603 Squadron, which served with such distinction in the Battle of Britain. With its many sets of Regimental Colours hanging from the walls, the Kirk provides an appropriate setting for formal occasions held by all these units from time to time.

Sunday by Sunday, members of the congregation, many of whom have a military link themselves, are ready to welcome visitors from any military community, not least those whose loved ones are currently serving in difficult and dangerous places. 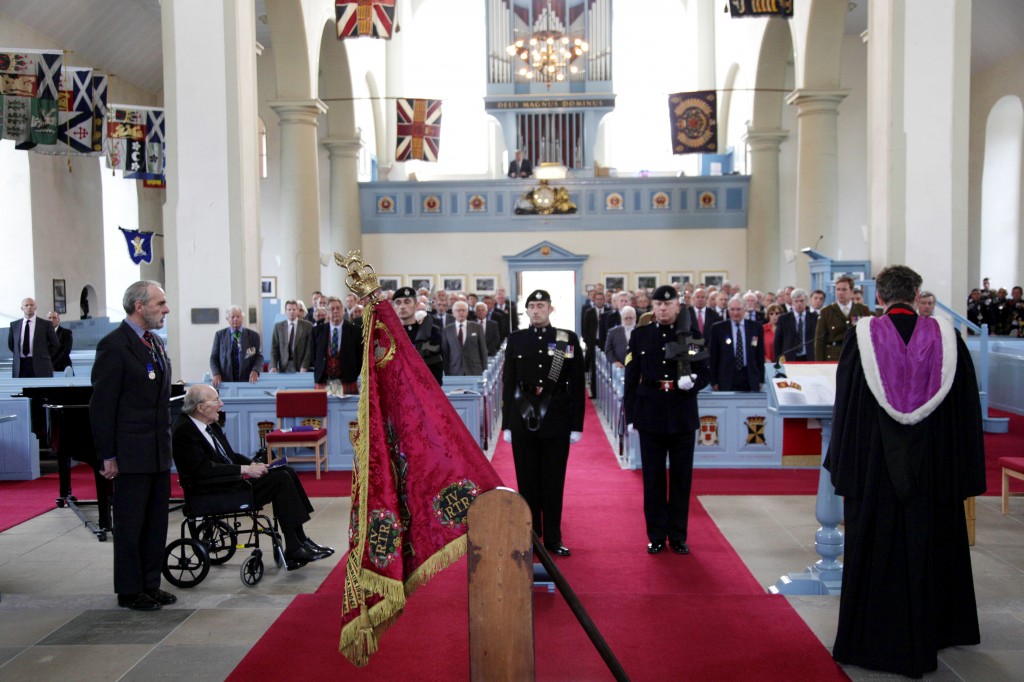 Almighty God, whose blessed Son did say unto St Andrew “Follow me”, grant that the Scots Guards, who wear the Cross of thy Holy Apostle, may follow thy Son with impunity; be made stronger in brotherhood and fierce against all enemies of our Saviour, ever going forward under the leadership of him, who by the hard and painful way of the cross, won high conquest and great glory, even Jesus Christ our Lord. Amen.

The Royal Regiment of Scotland
God of our fathers, whose hand shapes the coastlands and hills home, fashion likewise our lives. Guard the Royal Regiment of Scotland; keep us brave in battle, resolute in adversity, loyal to comrade and Crown; that inspired by the faith cross of Saint Andrew, we might secure lasting peace and eternal rest; through Jesus Christ our Saviour. Amen.

Permanent link to this article: https://www.canongatekirk.org.uk/about/military/