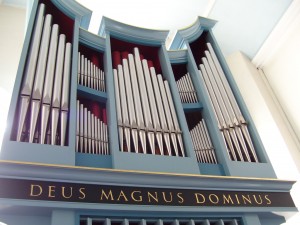 Click on the links below to listen to pieces performed on the Frobenuis organ by former David Goodenough, organist and Director of Music at  Canongate Kirk.

Three Chorale Preludes for Advent and Christmas, from Das Orgelbüchlein:

The Organ was specially designed for Canongate Kirk as a memorial to the Very Reverend Doctor Ronald Selby Wright, the much loved Minister of Canongate from 1937-1977.  It was built by the Th. Frobenius & Sønner, Orgelbyggeri A/S of Denmark, a firm well known in the organ world for meticulous craftsmanship and lyrical sound.  The Canongate organ is their 1000th instrument, and the first Frobenius in Scotland.  The instrument is a two manual tracker action instrument with 20 stops, 3 couplers and tremulant.  There are no pistons or general registration aids.

Pipes of Tin,  Copper or Mahogany

Draw stops of mammoth and ebony

The instrument has been recorded several times, most recently by the Edinburgh Society of Organists for their ‘Organs of Edinburgh’ CD book (Delphian) which can be ordered at: http://edinburghorganists.org.

Other recordings of the instrument include:

Permanent link to this article: https://www.canongatekirk.org.uk/organ/